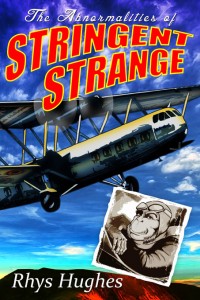 The world has never seen an aviator quite like Stringent Strange. Half man, half ape, half badly added fraction, he can fly anything with wings and many things without. Under the mentorship of the unorthodox genius Professor Tobias Crinkle, our hairy hero soon gets much more than he bargains for when he finds himself up against a fiendish Nazi plot to invade and conquer America before the war has even begun!

Fortunately there exists an invention that can help him fight back against the warlike scoundrels, but the consequences of using it will propel him into even greater peril, into an alternative future where the themes and tropes of early magazine science fiction are menacingly real and coexist in perfect disharmony! Into a bracing reality where the only weapons he can rely on are the three special abnormalities he was born with…

Come and join Stringent Strange in a stupendous, mysterious, inventive adventure set in a far-flung time When Pulps Collide!

You can still purchase unsigned copies directly through Amazon

Rhys Hughes is the acclaimed cult author of 20 books and more than 600 short stories. His work has been highly praised by Michael Moorcock, Michael Bishop, Mike Mignola and possibly other Michaels too. His first book, Worming the Harpy, was published in 1995 and achieved massive critical acclaim for its inventiveness and originality. Since then he has continued to experiment with science fiction, fantasy, fables, whimsy, humour, and metafiction with increasing success. Half of him is too clever by half; the other half does what it can to normalize the total.