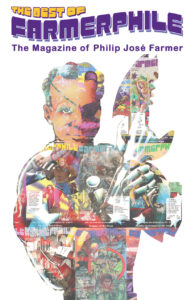 Farmerphile: The Magazine of Philip José Farmer was a quarterly fanzine that ran fifteen issues from July 2005 to January 2009. Michael Croteau served as Publisher for all fifteen issues; Christopher Paul Carey and Paul Spiteri coedited the first ten issues, while Spiteri and Win Scott Eckert coedited the last five. Thanks to the generosity of Philip José Farmer and his “Magic Filing Cabinet,” Farmerphile published—for the first time anywhere—short stories (mostly not science fiction), excerpts, articles, speeches, and letters written by Farmer. It even serialized the novel Up from the Bottomless Pit (not included in this collection, but forthcoming from Meteor House).

Farmerphile also contained articles and appreciations from Farmer’s fans and from his fellow science fiction authors, from critiques of his work to stories of personal encounters, and everything between. A complete list of the original contents of all fifteen issues can be found here. 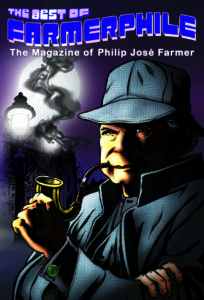 Now the hard part: narrowing down so much content into one “Best of” collection. This was much harder than it sounds, as nearly all the content was worthy of inclusion. So, we focused on broadly covering as much ground as possible, as well as including pieces that touched on Farmer’s personal life. Assembled here is a wealth of information about one of the greatest science fiction writers of all time along, with some of his earliest writing.

The Best of Farmerphile is available in two editions: a Trade Paperback and a Hardcover Limited Edition. The hardcover is not “officially” a signed limited edition, but when the book debuts at PulpFest/FarmerCon XII in late July 2017, we will get as many contributors on hand as possible to sign it before we ship the books to those preordered (shipping will occur immediately after PulpFest/FarmerCon XII).

Below is the table of contents as of January 26th, which would have been Farmer’s 99th birthday. Contents are subject to change, and by change we mean they are likely to grow a bit.

Nonfiction by Regular Contributors
The Roller Coaster Ride with Phil Farmer by Bette Farmer
The Farmerian Holmes by Win Scott Eckert
Excessively Diverted, Or, Coming to Pemberley House by Win Scott Eckert
Only a Coincidence: Phileas Fogg, Philip José Farmer, and the Wold Newton Family by Win Scott Eckert
Gribardsun through the Ages by Win Scott Eckert & Dennis E. Power
When Day Breaks the Stone God Awaits by Dennis E. Power
Philip José Farmer and The Case of the Two Jungle Lords by Dennis E. Power
Bibliophile–The Other Log of Phileas Fogg by Paul Spiteri
Bibliophile–Jesus on Mars by Paul Spiteri
Bibliophile–Lord Tyger by Paul Spiteri
Through the Seventh Gate by Christopher Paul Carey
The Archaeology of Khokarsa by Christopher Paul Carey
The Magic Filing Cabinet and The Missing Page by Christopher Paul Carey
A Box Within a Box: Philip José Farmer as Maxwell Grant as… by Danny Adams
Remembering the Eyre Incident Three Decades Later by Danny Adams
Star Trek’s Loss Is Your Gain From Screen Treatment To Short Story by Danny Adams

Nonfiction by Guest Contributors
Essex House, Tarzan and Time’s Last Gift by Bob Zeuschner
The Trickster Awakens: Philip José Farmer and Venus on the Half-Shell by Tracy Knight
On a Riverboat with the Farmers by Gary K. Wolfe
Heritage of the Flaming God A Classic Essay, Long Forgotten, Inspired Farmer by Alan Hanson
Caliban by Will Murray
Phil & Bette Farmer, Jack London, a Wife and a Baby, a Clean Well Lighted Hotel Room by Joe R. Lansdale
Sketches from the Ruins of my Mind by Robert R. Barrett
Smoke Gets In Your Nose by Spider Robinson
On Not Going There by Howard Waldrop
We Were Introduced by Sherlock Holmes by George H. Scheetz
Escape from Loki Again, and Again, and Again… by Steve Mattsson
Bibliophile—Tongues of the Moon by Heidi Ruby Miller
To Be, or Not to Be by Tom Wode Bellman
A Whale of a Time by Leo Queequeg Tincrowdor
This Played in Peoria? by Art Sippo
The Voice of Farmer in My Vermiform Appendix by Rhys Hughes
Writing Graceland by Allen Steele

Fiction by Philip José Farmer
The Face that Launched a Thousand Eggs
The Unnaturals
That Great Spanish Author, Ernesto
The Essence of the Poison
The Doll Game
Keep Your Mouth Shut
The Frames
The Light-Hog Incident
A Spy in the U.S. of Gonococcia
The Rebels Unthawed
A Peoria Night
The First Robot
Duo Miaule
Getting Ready to Write (with Paul Spiteri)

The trade paperback edition is $29 (plus shipping).

The hardcover limited edition is $40 (plus shipping).

Or you can preorder them together for only $62—that’s $7 off (plus you’ll save even more with combined shipping)!

NOTE: due to the complexities of publishing rights, no ebook edition will be produced! 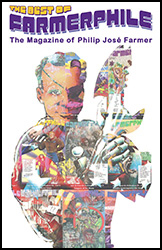 The Best of Farmerphile: Paperback
Price: $29.00 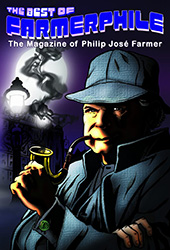 The Best of Farmerphile: Hardcover
Price: $40.00 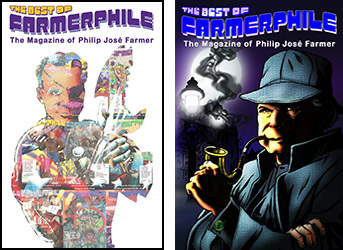