Winner of the 2014 New Pulp Award for Best Novella! 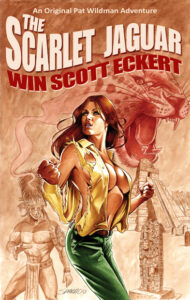 When we last saw Patricia Wildman, daughter of Doc Wildman, the bronze champion of justice, six months had passed since the main events of The Evil in Pemberley House. She and her associate Parker, an ex-Scotland Yard Inspector, had set up Empire State Investigations at her Pemberley House estate—and she just received a mysterious phone call from her supposedly late father . . .

Several months later, Pat receives a visitor, a young girl named Emma Ponsonby, whose father, a British diplomat to a small Central American country, has been kidnapped by the Scarlet Jaguar. Pat, following in her father’s footsteps of righting wrongs and assisting those in need, agrees to help, but before they can set off on their quest the Scarlet Jaguar sends a gruesome warning.

Undeterred, the investigation takes Pat, Parker, and their young charge from Pemberley House in the Derbyshire countryside . . . To New York, where they battle agents of the Scarlet Jaguar and meet Pat’s old friend, the icy, pale-skinned beauty Helen Benson, who agrees to join them on their quest . . . To the small nation of Xibum, where the Scarlet Jaguar’s reign of uncanny assassinations threatens to expand to the rest of Central America—and beyond!

Now, it’s a race against time deep in the wilds of the Central American jungle, as Pat Wildman and her crew search for Emma’s father, and confront the Scarlet Jaguar’s weird power to eliminate his enemies from afar, marked only by a wisp of crimson smoke—smoke resembling nothing so much as the head of a blood-red screaming jaguar. But who—or what—is the Scarlet Jaguar? A power-mad dictator determined to reclaim power? A revolutionary movement bent on taking over the country, and the rest of Central America?

Or a front for something even more sinister . . .?

Win Scott Eckert is the coauthor with Philip José Farmer of the Wold Newton novel The Evil in Pemberley House, about Patricia Wildman, the daughter of a certain bronze-skinned pulp hero. Pat Wildman’s adventures continue in Eckert’s sequel, The Scarlet Jaguar (the 2014 New Pulp Award winner for best novella). He is the editor of and contributor to Myths for the Modern Age: Philip José Farmer’s Wold Newton Universe, a 2007 Locus Awards finalist. He coedited and contributed stories to three Green Hornet anthologies for Moonstone Books. His tales of Zorro, The Avenger, The Phantom, The Scarlet Pimpernel, Captain Midnight, The Domino Lady, and Sherlock Holmes can be found in the pages of various character-themed anthologies from Moonstone, or in anthologies such as The Worlds of Philip José Farmer (Meteor House), Tales of the Shadowmen (Black Coat Press), and Tales of the Wold Newton Universe (Titan Books). His critically acclaimed, encyclopedic two-volume Crossovers: A Secret Chronology of the World 1 & 2 was released in 2010, and A Girl and Her Cat (coauthored with Matthew Baugh), the first new Honey West novel in over forty years, came out in 2014. Forthcoming works include: the third Pat Wildman adventure; a new novel of one of the preeminent pulp heroes of the ’40s, The Avenger; and the unfinished fourth novel in Farmer’s Secrets of the Nine series, The Monster on Hold, furthering the titanic saga of Doc Caliban’s ongoing battle against the dark manipulators who hold the secret to eternal life, the Nine. Find him online at www.winscotteckert.com and @woldnewton (Twitter).