The Worlds of Philip José Farmer 4 – Coming this Spring!

At last, the news you have all been waiting for, the first of many book announcements for 2014, The Worlds of Philip José Farmer 4: Voyages to Strange Days is due out this Spring and is now available for preorder! 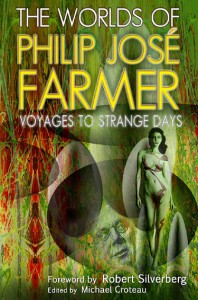 While the first three volumes in the series have focused on unique aspects of Farmer’s career, such as, his disregard for literary boundaries, his penchant for the softer sciences, and his trickster nature, volume 4 focuses on his more “traditional” science fiction—the science fiction of the future (occasionally the really distant future) featuring interstellar travel, aliens, war, scientists, the usual suspects in Golden Age science fiction.

While the full table of contents is not ready to be announced, we can say that volume 4 will be the thickest volume yet! We can also tell you that the foreword is by science fiction Grand Master Robert Silverberg and is in fact, a much longer version of his Reflections column from the February 2014 issue of Asimov’s.

As we’ve done in the past, the first 100 readers to preorder will receive a limited edition bookmark with their purchase!