Worlds of Philip José Farmer 2, come check it out! 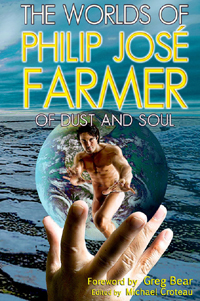 The contents (subject to change) of the second volume in the Worlds of Philip José Farmer series have been announced along with with the (most probably) final cover art!

While volume one in this series focused on Farmer’s lack of boundries, volume two looks at some of the themes oft repeated in his work. Instead of focusing on space, science, and technology, as much science fiction does, Farmer was more interested in heaven and earth. That is, man’s plight and his quest to extend his span through immortality or what might be waiting for us on the other side. Farmer is known for his pioneering treatment of sex in science fiction, but he also tackled the question of religion with equal zeal.

As an odd coincidence illustrating this point, all of the fiction in this volume, based on characters Farmer created, is set on Earth (more or less).

Come check out what we have in store for you when The Worlds of Philip José Farmer 2: Of Dust and Soul comes out this summer!