The Stone God Awakens in Hardcover!

Meteor House is thrilled to announce our second title for 2022. For the first time in hardcover, Phil’s great fun tale of the far-distant future, The Stone God Awakens! 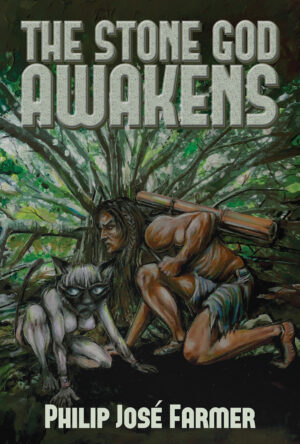 Originally published as an ACE paperback in 1970, The Stone God Awakens has been reprinted numerous times throughout the ’70s and into the ’80s, but is still one of Philip José Farmer’s lesser-known works. And that is a shame because, as Danny Adams (co-author with Philip José Farmer of The City Beyond Play and Dayworld: A Hole in Wednesday) spells out in his introduction, it is “a breathless mix of adventure, intellect, and myth.”

Meteor House is proud to give The Stone God Awakens the hardcover limited edition it deserves with some really wonderful cover and interior art by Charles Berlin.

This book is available in a Trade Paperback and Signed Hardcover Limited Editions (signed by Danny Adams and Charles Berlin). The hardcover features a leatherette cover with gold foil stamping—a high quality collectible in the tradition of Meteor House’s prior limited-edition hardcovers. We’re taking preorders now and both editions will ship as early as August 2022. The print run of the hardcover will be determined by the number of preorders, so reserve your copy today!