Free ebook when you Preorder The Abnormalities of Stringent Strange!

The Further Fangs of Suet Pudding 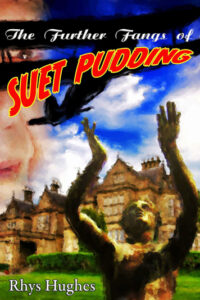 What happens when apeman good meets marshmallow evil? That’s the alarming question posed by this novella, which is a double sequel to two obscure and unlikely books, namely The Abnormalities of Stringent Strange by Rhys Hughes and The Fangs of Suet Pudding by Adams Farr…

In a forgotten corner of Africa, an eccentric club of veteran flyers must confront the unexpected arrival of a violet-scented jelloid Nazi with all the evil powers of a psychic pudding at his disposal! Only Stringent Strange, the apeman test pilot (plus his chums and a few readers) has a chance to prevent the repulsive invader from achieving total world domination!!

If you preorder the signed limited edition novel, The Abnormalities of Stringent Strange not only will your name appear in the book, but you will also receive, absolutely free, the novella-length ebook sequel, The Further Fangs of Suet Pudding, which you can read first, while you know, you wait for the novel to be published. Look its ok, Rhys Hughes writes such absurd, silly, mind-bending stories that doing something like reading a sequel first, makes perfect sense!