Being an Account of the Delay at
Green River, Wyoming, of
Phileas Fogg, World Traveler, or,
The Masked Man Meets an English Gentleman 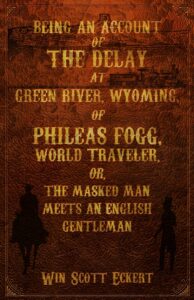 Jules Verne’s Around the World in Eighty Days

Philip José Farmer’s The Other Log of Phileas Fogg

THEY WERE ONLY THE BEGINNING!

December 1872. Phileas Fogg, the lovely Aouda, and his faithful manservant Passepartout, are nearing the end of their frenzied eighty-day dash around the world…

One wouldn’t think, as Fogg and Co. speed across North America on the transcontinental railroad, that they would have time to befriend a mysterious masked lawman, match wits with a long-lived criminal mastermind and his tong, and battle anti-Chinese sentiment in Old West coal mining communities.

One would be wrong.

Win Scott Eckert pulls back the veil on the previously untold tale of Mr. Phileas Fogg’s fateful encounter with the legendary masked rider of the plains and his faithful companion—an episode suppressed (with good reason!) by M. Verne himself from the final publication of his classic Around the World in Eighty Days.

Meteor House is proud to present our first limited edition chapbook, a 28 page, 9,800 word adventure signed by Win Scott Eckert. As with most of our books, the print run will be determined by the number of books preordered. Only a small number will be printed beyond the preorders, so to ensure you don’t miss out, be sure to order no later than July 5th.

And here is an added bonus: if you have preordered any of our forthcoming titles, this chapbook has free shipping (and will be sent to you, along with your other book(s), after FarmerCon in early August).

So, if you have already purchased any of the following:

DAYWORLD A Hole in Wednesday

You can purchase Being an Account of the Delay at Green River, Wyoming, of Phileas Fogg, World Traveler, or, The Masked Man Meets an English Gentleman for only $8.

But, if you have NOT ordered any of the above listed books, additional postage costs will apply.