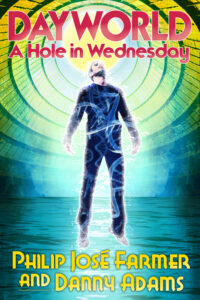 Farmer began a prequel Dayworld novel, A Hole in Wednesday, but did not complete it. His grand-nephew Danny Adams finished the novel and wrote a rollicking adventure tale. Set some time before the events in the original trilogy, the novel nonetheless has direct links to the acclaimed series, exploring the developing world and antecedent characters who vigorously challenge the life in which they find themselves trapped.

And speaking of being trapped, for all of you stuck in the house, we’ve just released the ebook version and immediately put it on sale for only $2.99!