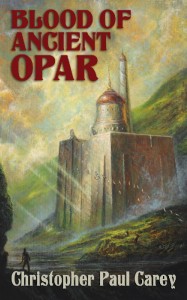 Philip José Farmer’s Khokarsa series records the history of a lost civilization that thrived in the heart of ancient Africa twelve thousand years ago at the twilight of the last ice age. The novels Hadon of Ancient Opar, Flight to Opar, and The Song of Kwasin told the story of the heroes Hadon of Opar and Kwasin of Dythbeth, as they battled a power-hungry tyrant who sought to overthrow the beneficent order of mother earth goddess Kho and raise up the mandate of baleful sun god Resu in its place.

In 2015, Meteor House published Hadon, King of Opar, a new Khokarsa novella by Christopher Paul Carey—Farmer’s coauthor on The Song of Kwasin, and the author of the Khokarsa series prequel Exiles of Kho—about which the British Fantasy Society said, “This book, the author’s best so far, cements [Carey’s] position as quite possibly the best writer currently working in the classic heroic fantasy genre.”

Now the epic saga of Khokarsa continues in Blood of Ancient Opar, a brand-new sequel novella to Hadon, King of Opar by Christopher Paul Carey, chronicling Hadon’s further adventures in the fallen empire’s last remaining queendom. Using Farmer’s own notes, Carey at last fills in the missing history of a civilization lost to the mists of time…

On the heels of a devastating invasion by a ruthless pirate lord’s army, the destiny of Khokarsa’s last remaining queendom hangs in the balance. Even as King Hadon leads his forces to victory against the raiders, the conniving oracle of Opar and the high priest of the Flaming God conspire to place themselves upon the ivory throne, launching a civil war that rages throughout the city. But deep beneath Opar, a secret message from Sahhindar, the god of Time, has lain buried for centuries, waiting for Hadon and his daughter La to uncover it. Soon Hadon comes to suspect that La conceals her own mysterious plans, but will they save the city of gold and jewels from utter destruction—or shatter the foundation of Time itself?

Featuring cover art and a frontispiece by Hugo Award-winning artist Bob Eggleton, Blood of Ancient Opar is immediately available for preorder in both a $27 signed limited hardcover edition and a $16 signed limited trade paperback edition.

Blood of Ancient Opar will debut at PulpFest 2016/FarmerCon XI, July 21–24 2016, in Columbus, OH. At PulpFest/FarmerCon, Mr. Carey will sign the complete limited edition run of hardcovers and softcovers. All preordered books will ship to customers in early August 2016.

As with all of our Signed Limited Edition Novellas, your name will appear on the acknowledgments page in the same order you preorder—as long as you preorder by June 15th 2016.

Also note, the print run will be determined by the number of preorders received. Not many copies beyond those reserved will be printed, another reason to get your order in today!