A Rough Knight for the Queen – First Stand-Alone Edition! 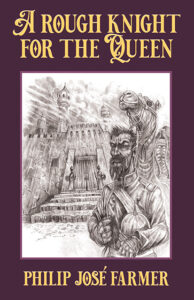 Philip José Farmer fans know that he was fascinated with 19th century explorer and author Sir Richard Francis Burton. Farmer made Burton the protagonist of the Hugo winning novel, To Your Scattered Bodies Go, the first book in the Riverworld series. In Gods of Riverworld, the final book in the series, Peter Jairus Frigate (Farmer’s fictional stand in) said that he had written a biography of Richard Burton but that Fawn Brodie’s biography of Burton came out before Frigate could get his published. When asked about this in the early 2000s, Phil said, “I was going to write a biography of Burton but Fawn’s biography came out. It seemed to be pretty definitive so I decided not to write more.”

The biography Farmer did write about Burton starts in 1855, when Burton was thirty-four years old and on an expedition to find the source of the Nile. As for its origin, Phil explained, “This was written for what was called a ‘Men’s Magazine.’ I think the magazine was titled Gonads, but I am probably wrong. Anyway, for reasons unknown, the article was rejected and so went into the proverbial trunk.” 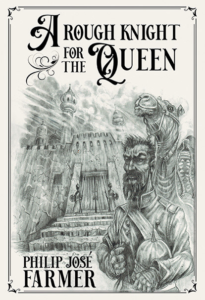 A Rough Knight for the Queen stayed in that trunk for decades until Farmer sold the original unpublished manuscript and it eventually wound up in the hands of collector Craig Kimber. When Paul Spiteri and Michael Croteau were putting together Pearls from Peoria, a massive compilation of Farmer rarities published by Subterranean Press in 2006, Craig sent them a copy of the manuscript to include in the collection.

Now Meteor House brings you Farmer’s 26,000 word biography of Burton in both an affordable trade paperback and in a signed limited hardcover. Both editions feature introductory material by Mick Walton (author of Sir Richard Burton and His Circle), Mark Hodder (author of the Burton and Swinburne novels) and Paul Spiteri (editor of Pearls from Peoria). The hardcover limited edition will be signed by Walton, Hodder, Spiteri, and cover artist Charles Berlin.

Important note: the print run of the hardcover limited edition will be determined by the number of preorders. This means the majority of hardcovers will be sold before the book is even printed, so preorder your copy today!

But first, we have some deals for you:

Purchase both the trade paperback and hardcover of A Rough Knight for the Queen and save $5*.

Purchase the paperback edition of A Rough Knight for the Queen and Up from the Bottomless Pit and save $4*.

Purchase the hardcover edition of A Rough Knight for the Queen and Up from the Bottomless Pit and save $6*.

Purchase both editions of A Rough Knight for the Queen and Up from the Bottomless Pit and save $10*.

*And additional savings with the combined shipping.

If you are only buying A Rough Knight for the Queen, follow this link to the order page.